America's Boating Club of Colorado was originally chartered as Boulder Valley Sail and Power Squadron of the the United States Power Squadrons (USPS). The USPS Organization has been re-branded as American's Boating Club™. You will find the names used interchangeably on various literature and websites. We are one of America's premier non-profit boating organizations, consisting of approximately 450 Squadrons around the country.

The Boulder Valley Power Squadron was originally chartered in June of 1977, listed with 44 members, 28 of whom began with advanced grades earned from previous squadron memberships. Some transferred from Mile High Squadron of Denver, which was disbanded about ten years after Boulder Valley was formed. Eventually the bylaws were amended to include "Sail and Power" in the original name, and then in 2019 the name America's Boating Club of Colorado was adopted as the new brand of the organization.

The United States Power Squadron organization was originally formed in 1914 based on a proposal by Roger Upton, then the Rear Commodore of the Boston Yacht Club. Mr. Upton conceived the scheme of forming the motor boat members of the club into an organization with naval tactics and naval drills, with the accompanying runs and cruises; in other words, to have a yachting organization patterned after Uncle Sam's North Atlantic Squadron. The following articles provide a more detailed history of USPS and America's Boating Club of Colorado. 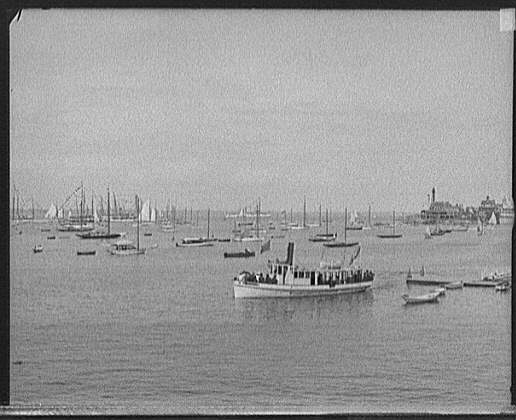 To fully understand what this encompasses, one would have to look back to the events occurring in the United States in the early 1900s. America was in the midst of the “Industrial Revolution” that had begun in the latter part of the 1800s.

The nation was transitioning from human manual labor methods to a more efficient, mechanized means of accomplishing its objectives. While animals and earlier mechanical inventions were still being used as a means of moving people and things from one place to another, newer, more efficient and more compact mechanical devices were being invented and developed by entrepreneurial individuals, that would propel this nation into the modern age we find ourselves in now.

The invention of the internal combustion engine brought with it, the ability to travel over longer distances on land in much shorter periods of time. Of course this new technology, that had revolutionized land travel, would soon be applied to travel over water, as traveling over water in the 1800 to 1900s was accomplished either by steam powered or wind powered vessels. Toward the end of the first decade of the twentieth century, internal combustion engines began appearing in smaller recreational boats.

The recreational boat owner of the early 1900s would be a sail boater and likely a member of a yacht club, where there was little interest in these new-fangled, foul-smelling dirty creations. After all, yachting was the sport of gentleman sailors and yacht clubs promoted and taught the sport of sailing. Still, the idea of a liquid fueled engine powering a boat persisted and began to take hold.

This new breed of power boaters joined yacht clubs (some were even converts from wind power), but found themselves out of place on club cruises and in club races.

One of this new breed of boater was Roger Upton, a sailing member of the Boston Yacht Club. He was fascinated by these new powerboats. The owner of a 50 foot ketch, he often sailed up the coast to Maine. However, as a businessman and because, as all blow-boaters know, wind power is often unreliable, he purchased one of these new powerboats in 1909; a 35 foot motor launch. Powered by a gasoline engine, its purpose was to serve as a tender for the ketch and to tow her when nature refused to cooperate. His love for this new way of plying the waters off the New England coast was immediate, so much so, that the following year, he installed a 20-hp kerosene/gasoline fueled engine in the ketch which allowed him less dependence on nature’s whims and to return to his business commitments, on time.

In the summer of 1911, Upton presented his thoughts to his colleagues in the Boston Yacht Club about forming a club-within-the-club for the growing number of power boaters, which would develop new forms of racing and cruising suitable for the new vessels. Upton’s idea was founded on three principals:

With his ideas accepted, he was elected Rear Commodore of the Boston Yacht Club in 1912 and given charge over the newly created unofficial Power Boat Division of the fleet. R/C Upton, himself being a perfectionist of sorts and self-taught in the ways of navigation and boat handling, took the initiative to pass his knowledge onto the 36 members of the newly formed division. He developed courses for study, cruises and races suitable for powerboats and drills modeled after U.S. Naval maneuvers to improve his members’ boating skills.

The division was not all work and no play. There were monthly meetings that included social events, dinners and guest speakers.

During this period, the U.S. laws governing navigation applied only to steam powered vessels and was controlled by a governing board of old, crusty sea salts, known as steamboat inspectors, who had little use for these new gasoline powered, recreational boats. However, they desired to gain control over them and apply the same stringent rules that applied to larger steam powered vessels, to these new boaters. Upton and others set out to protect the new power boaters from the stigma of ignorance and foolhardiness of these inspectors.

During the summer of 1912, the benefit of power boating came full circle, when, on the annual Boston Yacht Club cruise to Portland, Maine, twenty members of the power boat division set sail with forty sailboats. During this cruise, the power boaters cruised in formation and demonstrated an elaborate system of maneuvers executed by means of flag signaling. While at sea, a Nor’easter unexpectedly blew up, disabling many of the sailing vessels. Under Upton’s command, the power boaters went to the rescue of their sailing counterparts and towed the disabled vessels to safe harbor. No losses were reported. The September 1912 issue of Motor Boating Magazine reported the incident with a six page photo story. Needless to say, the event dispelled any negative views held by sailing members of the Boston Yacht Club and proved the practicality of recreational motorboats. 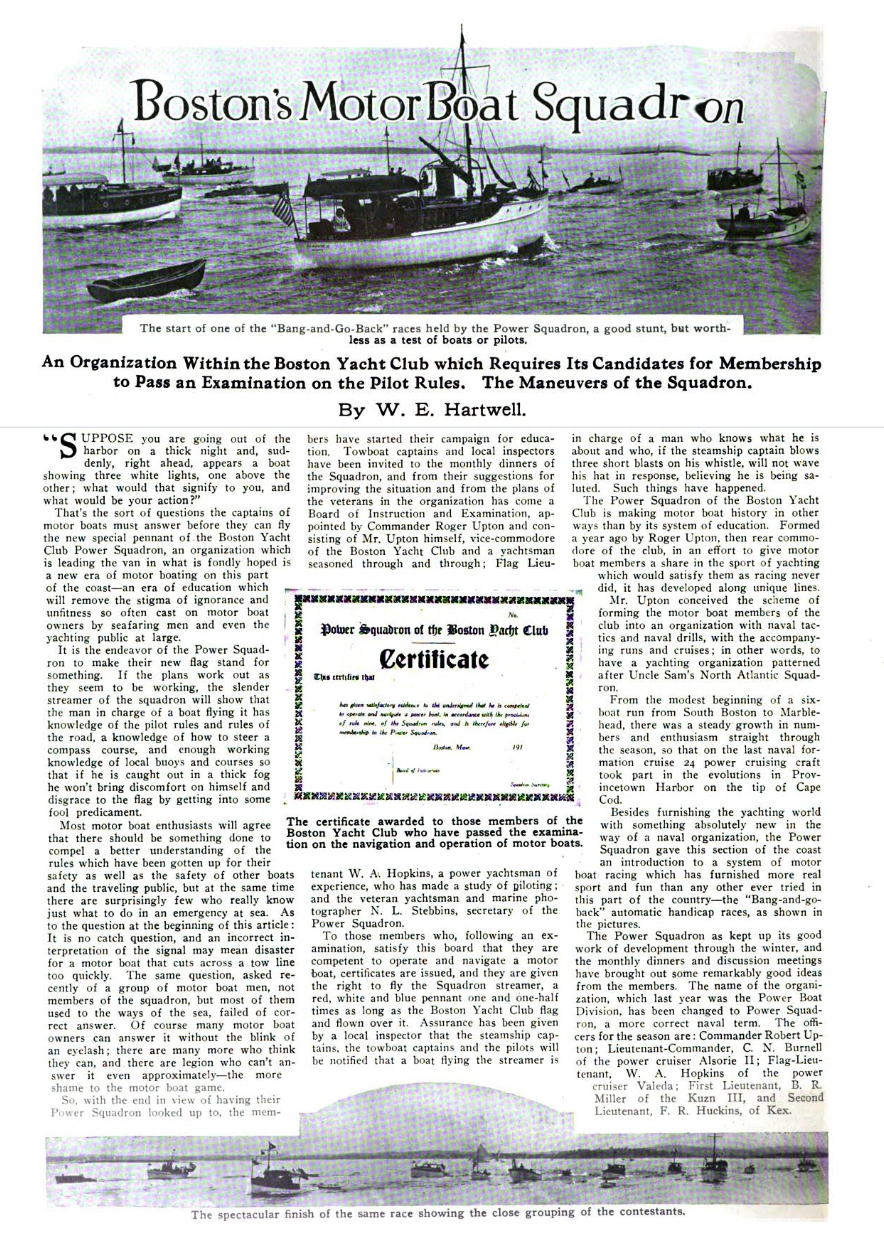 The names of the officers and rules of the new organization were published in the 1913 edition of the Boston Yacht Club Yearbook. The officers were: Roger Upton, commander, C. N. Burnell, lieutenant commander, and Nathaniel L. Stebbins, secretary. As with any idea that comes into fruition and proves its usefulness, the development of a power boat organization became an active movement. The media of the day spread the news of the activities of this new organization.

Yachting Magazine and Motor Boating Magazine with its associate editor, Charles F. Chapman, featured this new organization and promoted the movement. As a result, many new clubs and associations were formed along the Eastern U.S. seaboard.

The Boston Yacht Club contacted thirty delegates representing seventy clubs and associations in November of 1913, to meet at the New York Yacht Club for a conference to consider the formation of power squadrons. The result of this meeting was the formation of the Power Squadron Conference Committee. With interest increasing, the new committee met again on December 5, 1913 at the New York Yacht Club and an outline of the suggestions of the meeting was sent to all who were interested. A second Conference Committee meeting was called for on February 2, 1914. It was at this meeting when the final work of organizing and launching the United States Power Squadron was accomplished. 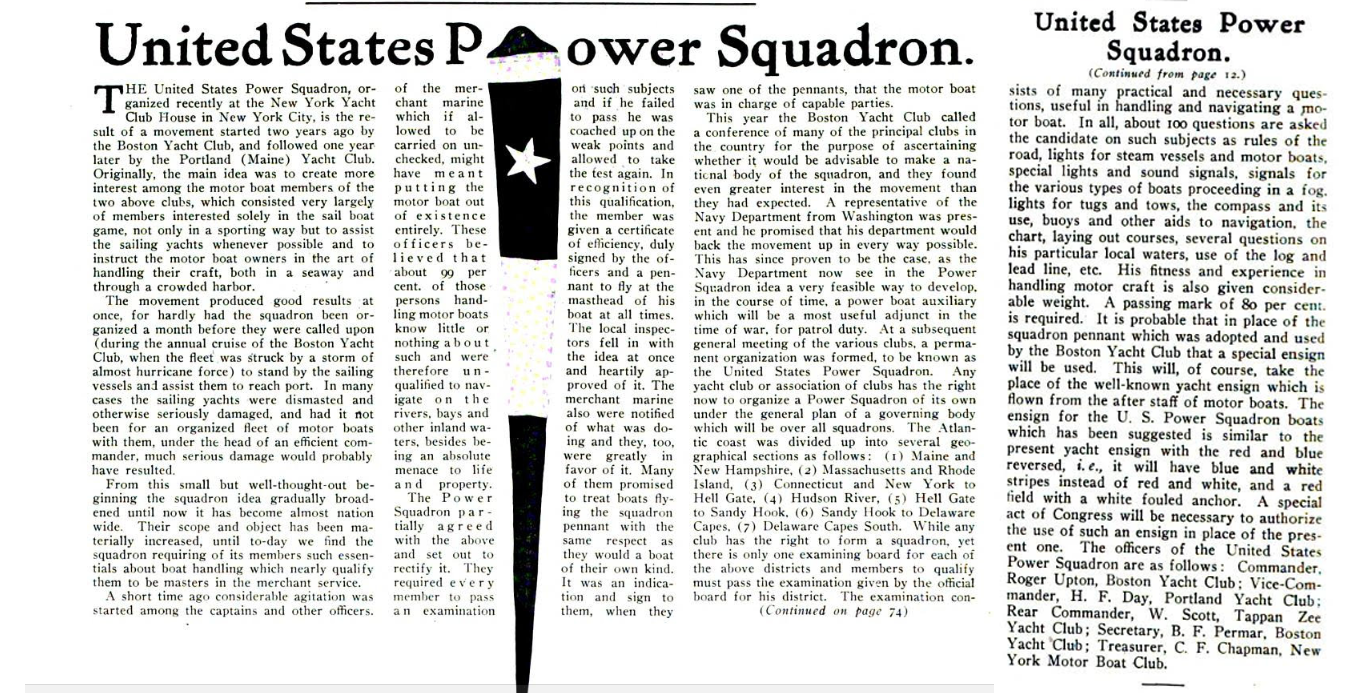 Flown on a vessel when a USPS member is in command.

P/C/Cs Roger Upton filed for patent on the design in 1914, and it was officially adopted by USPS in 1915. Early on, the USPS ensign assumed much the same dignity as the yacht ensign and was flown in place of the U.S. ensign while in domestic waters [Bylaw 22.1]. The USPS ensign may be flown only when the vessel is under direct command of a USPS member.

The design and physical specifications of the USPS ensign are as shown in the Operations Manual and as described in USPS Bylaws. Note that the canton of the flag extends over six stripes, the first full stripe being blue. In black-and-white representations of the ensign effort should be made to distinguish between the red canton and the adjacent blue stripe by a fine white line.

Here are a few more articles written by members of USPS. 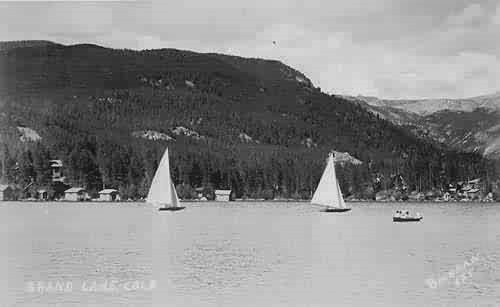